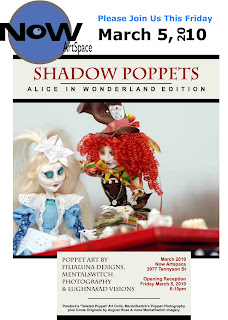 We have confirmed that August & I will be showing this coming First Friday - March 5th with Dan Chick (mentalswitch) at the NOW Artspace located at 3977 Tennyson.

I will be showing 12 of the 'Twisted Poppets', including the new 'Alice' series in honor of the Tim Burton movie opening and Dan will be debuting a new series of photographs based on those very same Poppets!

August will be showing a range of his original large format conte work that will also include a few Poppets!

Join us down at the 39th and Tennyson area for our Gallery debut!! Expand your First Friday scene!