Some ten thousand years ago, in the time the Dark Ones call ‘the Fall’, the Veil was cast over the world, and a great magic was lost. Gaia shook and became transformed. Many civilizations ceased to exist. A few, however, remained and survived. Among these were the Glaschielverto, who exist in isolation, undisturbed by and unknown to the sleeping masses of humanity.

Far beyond even the furthest boundaries of Darkrose Hollow, beneath the ever-changing, frozen waterfall that is the terminus of the currents of ‘the Brook’ reside the Glaschielverto. These tall elves have lived underground in the dark, frozen remains of the forest and fields they once inhabited on the surface. The greater magic lost to them, the Glaschielverto culture evolved and resigned itself to a new world, a world of caves and sunken lands covered in ice and the cold pall of death.

Cut off from the human world, their ancient elven traits were not bred away. To this day, the Glaschielverto remain taller than humans, have kept their cloven feet and pointed ears, but have lost the pigmentation in their skin, hair, and eyes. Nearly blind for the absence of light in their caves, they ‘see’ still through extremely sharp senses. They clothe themselves elegantly, if sparsely, in flowing black and silver garments which stand out in stark contrast to their white skin, their white hair, their white eyes.

In days past, it is said, none who dared trespass into their world came back, as they were dispatched permanently by the reclusive Glaschielverto. Yet as the modern world grows smaller, and humans invade every corner of the Earth, the peace of their lands is threatened. Soon, not even the hooded, cloaked Cardinals that protect the elves, their king and his queen, will be able to protect that peace. It will not be long now before the eager and the foolhardy will transgress and intrude upon the primal world of the ‘elven ice demons’ known as the Glaschielverto…. 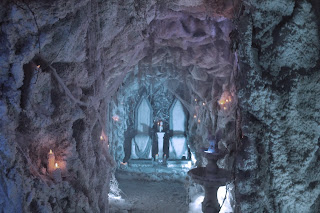 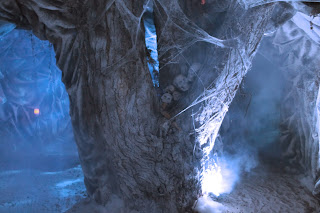 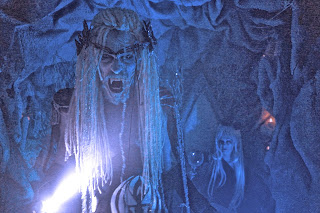