Straw Bales and an Orange Lightbulb...

So, in an effort to get into the spirit, despite the lack of true Darkrose Manor glory in our front yard this year, we were outside setting up a few harvesty/halloweeny items on the front porch yesterday afternoon.

We had several bales of wonderfully decomposing straw that had been sitting in the backyard all summer. So, we decided to arrange them around the front porch to house a few jackos and maybe a pumpkin creep or two to keep Virgil company for Halloween. 'Darkrose Hollow' - or rather 'Darkrose Small-o' - for 2012.

So, a few straw bales, tree stumps, and a couple of orange bulbs in the trees later, we are sitting on the porch, happily sipping adult beverages, enjoying the early evening autumn air while admiring the small setup, if not lamenting the true lack of 'overboard' that we have usually accomplished by this time of year... when suddenly, a small gold sedan pulls up to the curb, the window rolls down, and an older woman hollers out the window saying, "if you block the street with people at your house this year, I AM CALLING THE COPS!" She then rolls up the window and speeds off just as quickly as she pulled up to the curb. No time for discussion, no time for retort. Nada.

Nice. The funny part is that we actually had security directing traffic last year. The road wasn't blocked - at all.

This followed an afternoon where most were stopping by to ask us why we hadn't set everything else up this year and that they were terribly disappointed.

Apparently, a 'harvesty' look at DRM is just as scary to some of our neighbors as the real DRM thing. 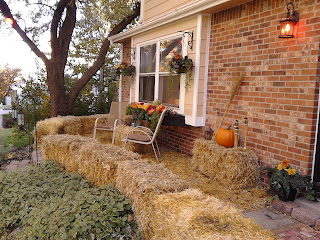 Whatever. I guess we can't please everyone.
Still looking for pumpkins and corn stalks to complete the tamed down version of Darkrose Small-o, though. :-)

Posted by Darkrose Manor LLC at 9:11 AM